At this point in time, the Chilean blueberry harvest is focused on the southern regions of the country, while the central south zone (Maule, Ñuble and BioBio regions) is already in the final third of its season. On the other hand, iqonsulting reports that the rains forecast for this week were low to medium intensity and therefore will have a minor impact on the export volumes.

The shipments of week 5 reached 6,969 tons and the total up to date is 94,076 tons, similar to the accumulated at the same week of the previous season. The market distribution was 60% to North America, 11% to the Far East and 28% to Europe. 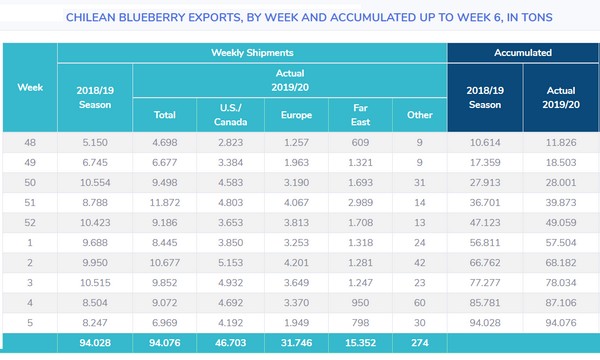 In this context and in relation to the current situation that is affecting China, this has been a week waiting for the return of vacations given by the government as a preventive measure against the Coronavirus outbreak, on February 10th. This moment will be key to see how the return of the activity in the Chinese market will be, after weeks of stoppage.